The 2013 season was riddled with injuries for Team EJP Racing. Lane Shorey had to sit out most of last years racing with a major leg injury that is still showing affects. Patrick Prescott got off to a slow start in 2013 having to overcome a broken scapula. After he made his return however, he found his speed and finished off the season with two top 3 championship finishes. Reid Lanpher finished up his season at Jr. Motorsports with some strong runs down south, and showed flashes of excellence back home in the Super Late Model. After a long off season, we are back to racing!

Team EJP two wheel action got kicked off Sunday May 4th at Hemond’s Motocross Park in Minot Maine. Lane Shorey has decided to forgo taking a shot at qualifying for this year Loretta Lynn’s Amateur National due to the severity of his 2013 injury. The 141 used this first weekend of racing as a confidence builder running the 125 Youth B, and the 250 B classes. Track conditions were made perfect by the overnight rain and Lane was able to pull great starts for two top 3 finishes in the first motos.

Patrick has made the full switch to the 85cc machine and after one race it is clear that the transition was perfectly executed. His confidence showed fully when he almost ripped the holeshot in the 85 C class and continued to run second for the duration of the first moto. He had another good start in the supermini class, going down briefly while running 4th, and crossed the line in 5th.

Shortly after the first motos were completed, the skies opened up and the race was forced to end early due to wet track conditions. Team EJP would head home with all top 5 finishes and a great start to the 2014 motocross season.

Reid Lanpher kicked off 4 wheel racing for Team EJP on Saturday May 3rd at the Pro All Series race at Beech Ridge Motor Speedway. Reid would drive his Super Late Model to a heat race win and a pole start for the main event. He fell back early to save his tires and as the race continued the car got worse. Late in the race, Ried attempted a charge to the front but was only able to make it to 11th.

After just a few short weeks of practice and racing, Team EJP is looking strong! 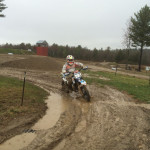